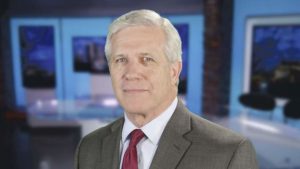 Eric Olson is a reporter with WPTA-TV in Fort Wayne and a board member for the National Airmail Museum.

Eric Olson Reporting: The winter of 1924 was not the coldest on record in northern Ohio – but it was the third-coldest. And the coldest night of that near-record cold winter occurred on Feb. 18, when the temperature dropped to 30 below zero.

Lakes and small streams froze solid. Livestock in local farm fields froze to death standing up. One farmer checked on his herd of cattle the next morning and found half of them, 26 animals, frozen solid standing up as the rest of the herd wandered, dazed, among the rigid corpses.

On that frigid morning a local aviator, Jimmy Hill, crawled out of bed, slipped on his 60-pound sheepskin and leather flight suit and headed to the local airfield in Cleveland. Jimmy Hill – James Dewitt Hill – was one of the first 40 pilots hired by the U.S. Postal Service for its brand-new, experimental airmail service flying from New York to California, relay style, in an unheard-of 33 hours.

Aviation in the 1920s was extremely low tech. Airplanes were open cockpit, no canopy, no heat. Instruments were essentially non-existent and the ones that were available were unreliable. Pilots navigated from city to city following railroad tracks and riverbeds. One pilot claimed an airplane’s instrument panel just cluttered up the cockpit and distracted him from concentrating on the railroad track he was following to reach his destination.

Hill arrived at the airfield that frosty morning, hopped in his fabric-and-wire Curtis JN-4 “Jenny” and took off with a load of mail heading for Hadley Field in New Jersey. Before he throttled down the runway, Hill lit a cigar. His wife hated the smell of cigar smoke, so he indulged while flying the mail at 5,000 feet. That cigar lasted until Jimmy reached Mercer, Pennsylvania, about 75 miles, just as a heavy bank of clouds moved in obscuring the ground.

Hill checked his pocketwatch for the time so he’d know when to drop through the clouds to locate Hadley Field and land. But his pocketwatch had frozen, stopped dead, presenting the young pilot with a serious dilemma. Now Jimmy knew the cigar he lit when he took off from Cleveland lasted until he reached Mercer, 75 miles. He knew he still had 255 miles to go until he reached New Jersey, or about three and 2/5ths cigars. He reached into his flight suit, retrieved four cigars, laid three of them beside him and lit the fourth. When that cigar burned to a stub he lit another and so on, chain-smoking in the clouds. When two-fifths of the fourth cigar was gone, he drifted down through the overcast and there, not far from where Hill emerged from the fog, was Hadley Field. Another successful leg for an early U.S. Airmail pilot.

Hill was one of the lucky ones. He survived his airmail service until the Postal Service turned the work over to private contractors in 1927. Of those first 40 airmail pilots hired by the post office, 31 were killed in crashes, three out of four of those young men dead. James Dewitt Hill would go on to attempt a transatlantic flight to Rome with another former airmail pilot, Lloyd Bertraud. The two took off from Orchard Beach, Maine, on Sept. 6, 1927 and were never seen again.

We talk a lot of heroes and bravery and service these days, but there were no braver souls than the kids who risked their lives, losing them more often than not, flying America’s mail at the dawn of aviation. The historic hanger at Fort Wayne’s Smith Field was a crucial station in America’s early airmail system. Pilots pushed their cloth-and-wood airplanes into that very hanger for repairs, climbed the stairs in back to the pilots’ quarters for much-needed sleep until their planes were ready for the next leg.

History’s most famous pilots walked that hanger’s floor: Jimmy Doolittle, Wrong-Way Corrigan, Eddie Rickenbacker, Charles Lindbergh. The story of the U.S. Airmail Service is the greatest story never told, and the mission of Fort Wayne’s National Airmail Museum will be to ensure that story is told, finally, and remembered. It’s a story of service and sacrifice, heroism and bravery – and there is no better place on earth to tell it than in that building at that airport in this city.

If you’d like to learn more about the effort to establish the National Airmail Museum, we invite you to visit our website, www.nationalairmailmuseum.org.